Helen Fields met her agent, Caroline Hardman, through The Winchester Writers’ Festival. Perfect Remains, her first novel in a new crime series, will be published by Avon (HarperCollins) in January 2017.

Getting published is the same as everything in life. There’s no set path. Here’s how I thought it had happened for me… and then didn’t… and then actually did.

I spent thirteen years working as a criminal and family law barrister, but the birth of our third child made continuing too much of a sacrifice.  Since then I’d filled in as a producer in my husband’s media company but I’d always known I wanted to write, so I took some time out (courtesy of my very understanding husband) and gave it a go.

A few months later I self-published my first cross-over fantasy book.  I didn’t bother advertising it or sending it to agents. At that stage I was still testing myself.  Another six months passed and I’d written a sequel. That was when I attended the Winchester Writers’ Festival for the first time.  I met some wonderful people, learned a lot, and realised I was more serious about writing than I’d admitted to myself. Invited to read out a sample of my writing, I was advised (to my relief and delight) to find an agent.

At that point I decided to challenge myself by changing genres.  The result was historical fiction, although very dark and crime oriented, with a female protagonist who also happened to be a serial killer.  I wrote, edited, rewrote, then squashed my fear of rejection and sent it out to agents.  The response was good.  I had several agents asking for the full manuscript very quickly.  I was due to meet with Caroline Hardman from Hardman & Swainson at the next Winchester Writers’ Festival so she read it in advance, we met, and I signed with her immediately. It’s the dream, right? Write manuscript, get agent, open champagne etc etc.  Keep reading…

Soon my precious manuscript was winging its way to the inboxes of commissioning editors.  I received incredibly positive comments about my writing, the Edwardian London setting, the characters – you name it.  But I was a debut author and I’d done something problematic. I’d crossed genres, creating something like historical grip lit. I hadn’t put myself on an easy-to-market shelf. My lead female character was complex, edgy and I’d thrown together the suffragettes, gambling halls and a woman addicted to killing. This book is still sitting on my desktop.  All the positive feedback I could have wanted and still no publishing deal.

By then, I was already outlining another story set in a World War II hospital in Malta, but I needed research time.  Writing, though, had become an essential part of my day, so whilst researching that, I began writing a modern day detective series set in Scotland, drawing on my experience of criminals and the police, forensics and a country I adore.  And suddenly there it was, the elusive book deal.  The Avon imprint of HarperCollins asked for three books and I’m in the process of writing the third. The first, Perfect Remains, comes out on January 26, 2017.   I loved getting into the head of a psychopath who, I very much hope, gets deeply under readers’ skin (not to mention the amateur dentistry)… 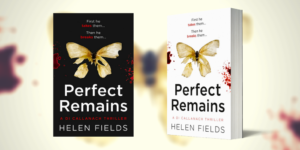 The dream, finally, became a reality.  I work with a talented, funny, supportive publishing team and I’m loving it. The dramatisation rights have already been sold.  The second book in the series, Perfect Prey, is in the process of cover design and line edit.  I’m plotting where my Scottish detective characters go from here and mulling over a screenplay idea.

My advice to you, is to write with a nod to what is commercial if you want to give yourself the best chance of getting published.  Be easy to work with.  Bend.  Accept advice.  Be grateful when people offer words of wisdom, even if they’re not the ones you wanted to hear. Be prepared to edit until you can’t stand to look at your manuscript any longer. And as I said, don’t expect it to happen the way you expected it to happen. The ride will be all the more exciting for the surprises.