Judith Heneghan, Festival director and Senior Lecturer in Creative Writing at the University of Winchester, discusses how she began to write her latest novel.

Where do ideas come from? Writers are asked this question all the time. Despite the slightly hesitant tone that sometimes accompanies the query, it is a fundamental concern, and one creative writing students frequently ponder. Because ideas are everywhere, but the underlying issue, so often, is how will I know whether a thought is worth the immense and sometimes overwhelming effort required to grow it into a novel?

I don’t see how I can know, until I try.

Ideas exist already, in our memories, in our daydreams, in our unconscious. Writers take something they’ve seen, or heard, or thought, or imagined, and they play. All that matters, at the start, is that the writer is curious, and that they pay attention to this curiosity. 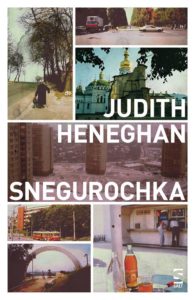 Some writers commit quickly. Others take their time. I’ve been working on a novel for several years, but I started thinking about it twenty-five years ago. I knew I wanted to write about a city – Kiev. I’d lived there for a while, back when I was a brand-new mother, and I’d heard a story about an orchard that could only have happened in Ukraine. This was hardly a novel, though; it was barely more than a sentence. I tried writing a memoir piece. I experimented with flash, a short story and, little by little, I paid more attention.

Places are ideas. So are events, and people. Once I saw a boy in a back lane in Kiev. He was sauntering towards me, staring, smiling, and as he drew nearer I saw that he had two pairs of cherries hanging from his ears. Another time I had a disturbing encounter with a petty crook in a white goods shop. Then there were the old women, everywhere, on the trams, in the churches, queueing outside the shops.

Who were these people? The more questions I asked, the more intrigued I became. Now I was making things up, inventing connections, weaving daydreams into fiction. It wasn’t yet a novel so I kept writing, moving things around, puzzling over what I’d got until I found the answers to my questions and could go back and build the layers.

I’m thrilled that my novel Snegurochka will be published by Salt in April 2019. It’s taken me a while and there are edits still to do, but if anyone asks me where the idea came from, I might say a trip to an unfamiliar place. Or an old woman on a tram. Or the sound of dogs barking. Or a theft from a white goods shop. Motherhood, of course. A sense of vertigo, possibly. There’s a folktale about a daughter made of snow.