Florianne Humphrey attended the three day event in June 2018 as the recipient of one of ten scholarships offered by the Festival this year. 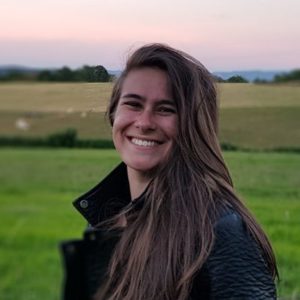 Winchester Writers’ Festival claims it’s a three day-event. In fact, it lasts a lot longer than that. Six months on and I’m still putting pen to paper and thinking Oh yeah, I got that idea from Winchester. Three intense days of workshops, talks and panel discussions about all things literary have indelibly put a mark on my own writing. So how exactly have I benefited from Winchester Writers’ Festival?

Before the Festival, I’d been mulling over the idea of a website. Would it be too much effort? Did I have the time? Did I really need one? All it took was one Winchester workshop about blogging to make the decision for me. Okay, so I haven’t set up a blog exactly, but the great thing about Winchester is that it allowed me to take information and ideas from that workshop and apply them to my own comfort zone, interests and skillset. And so a website was born, one that has become a useful platform to promote my work.

The workshops are one of the best parts of Winchester (one of the best parts – there are many). The Winchester organisers must have a time turner because they manage to cram in such a range of workshops in such a short space of time, which means the chance to cram loads of valuable information into my head (or my notebook). I enjoyed these workshops so much that I thought – why not run them myself? A bold move perhaps, but one that has paid off with a series of successful workshops in the North East. So thank you Winchester for unearthing a new passion and a new-found confidence to share my ideas and experiences with others.

As all writers know, writer’s block is real. I repeat: writer’s block is very real, and it can be incredibly frustrating. But, you’ve guessed it, Winchester was that plunger that unblocked my ideas, as strange as that image may be. It was partly down to the workshops, and partly down to meeting and talking to so many fellow creatives. And the result? During Patrice Lawrence’s workshop on Young Adult fiction, all it took was one activity on choosing character names and, there she was, a flesh and blood protagonist with a new story to tell. During Claire Fuller’s workshop on short stories, one that I chose to purposely step out of my comfort zone, a full day session was enough motivation and inspiration to produce an entire short story – and spark a desire to write more.

Fact: writing can be a lonely profession. There are outlets like Twitter and online writing groups to offer support, but they can’t replace spending a weekend with like-minded people who are going through the same experiences of planning, writing, querying, and publishing. There are writers of all ages, all backgrounds, and all writing disciplines, so what you don’t learn from agents, authors and industry professionals, you’ll learn from fellow Festival goers. And all this learning takes place in the sociable environment of the Open Mic sessions, the shared accommodation, the group meals or even a night out in the city. And six months on, those writers I met at the Festival are now a vital network of support that has helped me in my own writing journey and, I hope, in theirs. Although we’ve inevitably taken this support online, from tweets of encouragement to beta reading, it’s the shared experience of Winchester that laid the foundations for these relationships to grow. And that, above everything, was the greatest benefit of all.

Florianne Humphrey is a journalist who has written two Young Adult novels, a play and a collection of short stories, one of which was shortlisted for the 2018 Bridport Prize. Her articles on literature have been published by media platforms such as the Daily Telegraph, The F-Word UK, Pendora Magazine, Verve Up and Papaya Press. Florianne privately tutors creative writing and leads group writing workshops for universities, schools, charities, and arts organisations. She is a facilitator for Thorn, a group that organises multi-disciplinary art events around Durham City. Her three great loves are German Shepherds, cheese and beautiful bookshops.