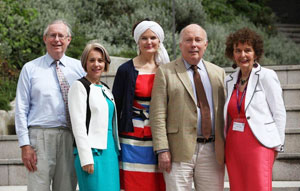 The Winchester Writers’ Conference, as it was known for many years, was founded in 1980 by Barbara Large, MBE, who understood that writers want to meet fellow writers and connect with the literary and publishing worlds. Barbara led the Conference as Director until 2013, supporting emerging writers, nurturing the warm and friendly ethos and establishing the workshops and one-to-ones that have become synonymous with publishing success for so many over the years.

The Conference was first convened at the University of Southampton, before moving to its current home at the University of Winchester in 2005 where it is now firmly established with an international reputation and attendees from around the world, complementing the University’s pursuit of excellence in the field of Creative Writing.

In June 2013, Barbara retired as Director after many decades of unstinting service to writers and to readers. Judith Heneghan became the new Director and at this point the Conference became the Winchester Writers’ Festival – a new name and a new logo as it moved into its 34th year. At the end of 2018, Judith Heneghan stepped down and Event Manager, Sara Gangai, took the reigns as the acting Director for the 2019 Festival.  The aims of the Festival remain the same: to continue to inspire and support writers working in all genres, both emerging and established, from the first spark of an idea to publication and beyond.

On 4 March, 2019, Barbara Large MBE passed away, leaving a huge number of friends, colleagues, and students across the globe who benefited from her passion, energy, enthusiasm and kindness.  The Winchester Writers’ Festival  and Hampshire Writers’ Society continue as her legacy to writers as they develop the craft of writing.