This week’s guest blog comes from one of the Festival’s regular speakers, Adrienne Dines.  Adrienne has tutored in creative writing since the publication of her first novel in 2006.  As well as her own writing she works with other writers to develop their skills and confidence. 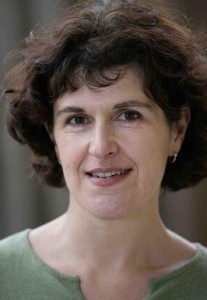 ‘It must be exhausting,’ the woman said, ‘having all that stuff coming out of your imagination.’  She was hovering over a pile of my books. ‘I mean, I just wouldn’t have the time to sit there and make stuff up.’

Sometimes you just have to smile.

For a start, writers don’t write because lots of stuff comes out of their imagination; they write because lots of stuff goes in. We are sensory sponges – absorbing the shifting tensions in a room, the little giveaway mannerisms and the light bulb moment, when someone says something and it fits with a scene you witnessed twenty years ago and filed away against the time when it all makes sense.

Secondly, nobody writes because s/he has time and chooses to spend it writing.   We write because so many impressions have gone in that our imaginations have reached saturation point and something has to come out before we go crazy. The 3am muse becomes the 11am harridan, berating us for not writing down that brilliant idea/line/scene we were convinced was unforgettable just as we dropped off to sleep.

We don’t make it up, we write it down and it’s not easy.

Contrary to the romantic notions of those who don’t have time to be writers, writing is real-life. It demands discipline and practice; it requires first drafts that are suspect and revisions that are humbling; it involves accepting critiques and sometimes it requires a thick skin and a large glass of gin and tonic*.  And it benefits from lots of support, encouragement and the friendly advice of others who know exactly what it’s like.

At the Winchester Writers Festival I am surrounded by others who do what I do.  I love when someone who was struggling to find the words last year has learned to recognise and trust his own writer’s voice, to recognise that’s it part of him, of how he is and who he has always been.  I love helping to unlock that. I love that it’s not a destination but a starting point and I get to be part of it.

Who wouldn’t find time to be a writer?

*I find Jamieson,  a crisp white wine or even just a generous helping of good dark chocolate can be substituted.  Failing that, tea is good.

On Sunday 22 June Adrienne is running a workshop at the Festival on ‘Voice’ for those in the early stages of a new project. Soggy-middlers and the pen-weary welcome also.